The Suburban Alcoholic Foundation can trace it lineage to what is considered the first AA meeting in Austin in 1945.

But before that, someone had to bring Alcoholics Anonymous to Texas.

That happened in 1940, when Larry Jewell, a “down on his luck” newspaper man from Ohio, boarded a train for another chance at employment, this time at the Houston Press newspaper.

Clarence Snyder, one of AA’s “original 100,” and the founder of Cleveland’s first AA group, gave a Jewell an AA “Big Book” the night before he left for Texas. Jewell had not even attended his first AA meeting.

He was in bad shape physically and had been advised by a doctor to move south for his health. Jewell read Alcoholics Anonymous on the train, had a spiritual awakening, and started an AA group when he reached Houston.

Members of that group, Roy Yeargan and Ed Hudson, made a failed attempt that year to get an Austin group started, but the effort fizzled and World War II intervened. Yeargan went into the Army and Hudson went into the Navy. Both returned to Houston in late 1945.

About that time, they were informed that a former member of the Houston group had fallen off the wagon and was checked-in at the Stephen F. Austin hotel in downtown Austin.

That poor alcoholic needed medical help, so the two men enlisted the help of an Austin physician, Dr. David Wade, who they had met in the early days of AA in Houston.

Dr. Wade knew of two other AA’s in Austin who were recent arrivals here. Clarence Long had just arrived from San Antonio. Long was one of the original founders of the Suburban Alcoholic Foundation.

The other new arrival was Ryan Pearson, who had gotten sober at an AA group in Little Rock, Arkansas.

Around the same time, Austin native Jimmy Meeks, who had sobered up at a Dallas AA group, returned home to the capital city.

The hotel charged a minimal fee to use a room for AA meetings. Over time, however, the relationship with the hotel soured as “wet” alcoholics caused disturbances when attempting to find the meeting.

By 1947, what was called the Downtown Group was renting a clubhouse, which it quickly outgrew, on West 18th Street. The group returned to the Hudson family house by 1948. The Downtown Group continued to meet there until 1955.

That summer, the Suburban Alcoholic Foundation was formed “to provide a permanent home for AA in Austin.” It has done so ever since. The Texas Secretary of State’s Office granted the Foundation’s Articles of Incorporation on July 13, 1955.

Days later, on July 18, the Foundation bought a thirty-five-year old, two-story, brick, Tudor-revival style house on 2.4 acres located at 2100 West 35th Street. The home was at the northwest corner of the intersection of West 35th Street and the Missouri Pacific Railroad track.

This clubhouse was known as “The Oaks.” It got its name from the large stand of ancient oak trees that surrounded the house on the property. Heading west on 35th Street, one can look off to the right when crossing the Mopac Expressway and see some of those old oak trees still standing on the west side of Mopac.

“The Suburban AA Group” met in the new clubhouse. It is somewhat amusing to think of the West 35th Street and Camp Mabry area as “the suburbs,” but it was back then!

According the Austin Statesman newspaper, (it wasn’t the American-Statesman yet), an Open House marking the dedication of the clubhouse was held on Sunday, Oct. 16, 1955. The Austin Statesman said Dr. Frederick Brooks, “the first Austin pastor to recognize and endorse AA as a spiritual movement,” was the guest of honor.

The old home struggled to keep up with the group’s large membership. The bathroom facilities were often cited as a problem. Yet AA and Al-Anon thrived there.

By 1964, the City of Austin’s expansion and improvement of what was then called Mopac Boulevard led to the closing of the West 35th Street clubhouse. It was in the proposed right of way for the present West 35th Street Mopac overpass. The city taking of the property proved to be a godsend as it led to the larger, present-day clubhouse.

In late 1964, Trueman O’Quinn, a member of the Suburban AA Group (and a former member of the Texas Legislature, City of Austin Attorney, and Texas Court of Appeals Justice) was directed by the Foundation to negotiate with the City of Austin to arrange compensation for the taking of the property.

A condemnation hearing was held on Jan. 28, 1965. On Feb. 3, an agreement between the Foundation and the City of Austin was signed to record the deal O’Quinn had brokered with the City on the Foundation’s behalf.

In exchange for the West 35th Street property, the City of Austin provided the Foundation $27,500 and five acres of land at the southwest corner of Northland Drive and Shoal Creek.

The Foundation used some of that money to pay off the $15,000 it still owed on the West 35th Street clubhouse mortgage. The rest was put aside for a new building.

The deal between the Foundation and the City required approval by the Austin City Council. It was a squeaker of a vote, 3-2. O’Quinn reported to the Foundation that the two council members who voted “no” apparently wanted the money to be spent on hike and bike trails.

The agreement with the City also allowed the Foundation to continue to use the West 35th Street property while the new clubhouse was being built. The City charged the SAF a monthly rent of $100.

The Foundation appointed an eight-member building committee, chaired by SAF member Bill Carter, to secure an architect and construction firm to build a new clubhouse. It would be purpose-designed to serve the needs of the AA community.

It is important to note that two of the eight-member building committee were Al-Anon members - Eloise Cabiness and Ann Cook.

On April 7, 1965, the Foundation signed a contract with Austin architect Fred Winfield Day to design the SAF clubhouse. Day also served as the Foundation’s representative during the construction process. He was paid $5,534 for the plans and project management.

Day designed several public and business buildings in Austin, some of which are still extant. Perhaps his most famous commission is the older portion of the University of Texas Alumni Center (1965) on the east side of the U.T. Campus.

Both the SAF clubhouse and the Alumni Center are designed in the Mid-Century Modern style. One can see similar details in both buildings such as extensive use of mahogany paneling and beamed ceilings, as well as floor to ceiling glass windows and a fireplace in a large public area.

Day’s preliminary plans were approved by the Foundation during the summer of 1965 and initial project estimates were completed.

Twenty-two individuals, all of whom have passed away, signed the loan and put up the collateral to secure it. Austin AA’s owe them a huge debt of gratitude. The names of the 22 are listed at the entrance of the SAF clubhouse:

On Nov. 10, 1965, the Foundation signed a contract with the Matthews, Newman, Oge Contractors to build the clubhouse. The projected cost was $73,500.

Austin Mayor Lester Palmer and SAF Board of Trustees chairman Cecil Cabiness, turned the first shovelfuls of dirt to start the construction process. The shovel they used, and the original wooden entrance door handles, are housed in an exhibit case at the front of “the Big Room.”

The building was furnished, for the most part, by Cabiness and Brown furniture store in downtown Austin. The cost of furnishings was just over $5,000.

All together (architect, construction, furnishings, parking lot, lighting, etc.), the clubhouse was built and furnished for $93,861.46, roughly $775,000 in today’s dollars.

The building was finished in late July of 1966.

A letter to the Foundation dated Aug. 1, 1966, from Bill Carter, head of the Foundation’s Building Committee, recommended specific rules for the clubhouse’s facilities. The Committee also suggested that the words “But for the Grace of God” be carved at the entrance of “the Big Room.”

An Opening Festivities Planning Committee appointed by the Foundation earlier in the year decided on a three-day celebration of the new clubhouse on the weekend of August 5-7, 1966.

According to copies of thank-you notes prepared by Foundation member Doris Carter, the event indeed happened on those dates.

The Foundation’s June 1966 meeting minutes note the plans called for a dedication at 7pm on Friday, Aug. 5, followed by an AA meeting at 8 pm. The Foundation would celebrate its 11th anniversary of Saturday, Aug. 6, and another AA meeting would take place at 11 am on Sunday morning, Aug. 7.

Those were the plans, at least, two months out.

The oral history handed down by those present is that first meeting of the Suburban AA Group at the new clubhouse say it was chaired by Fred Carter, one of those 22 who vouched for the loan. Carter had also served on the building committee.

The meeting opened at the old clubhouse on West 35th Street. At the usual 7th Tradition intermission, the attendees got into their cars, left that location and came to the present-day clubhouse where the meeting resumed.

AA meetings have been held here ever since. So have meetings of Al-Anon and Alateen.

Alcoholism is a family disease. The SAF clubhouse was built with the purpose of serving not just the alcoholic, but the family as well. An SAF old timer once recounted that it in the early days, “it seemed as if each AA member had an Al-Anon attached.”

In addition to meetings of AA, Al-Anon and Alateen, there were regular events such as dances with a live band, holiday gatherings, and bingo. The “card room” was active from the very beginning. “Suburban Rummy” was and remains the game of choice.

The original patio had a large stone grill set up at one corner for cookouts. It eventually was moved to another portion of the property.

Originally a custodian/caretaker lived onsite in the area now configured as the babysitting room.

The clubhouse also had a “drying out room” to help the “wet” alcoholic who stumbled through our doors.

In the early days, a register was passed in the AA meeting to record names and phone numbers. If time elapsed and one wasn’t seen at a meeting, they would be contacted to see how they were doing.

As there were few Austin AA groups at the time, meetings were always packed, but as the old AA joke goes, “all it takes is a resentment and a coffeepot to start a new AA group.”

In the early 1980’s, a “singleness of purpose” dispute amongst the AA’s led to the brief closure of clubhouse and the eventual creation of the Northland AA Group. It took up residency in the SAF clubhouse. Other members of the original Suburban AA Group decided to keep that name and took its meetings to another location.

Both groups continue to serve the Austin AA community to this day.

The SAF clubhouse became a non-smoking facility in 2005. In 2012, the Foundation undertook a major renovation of the clubhouse that included reconfiguring spaces and construction of new, larger bathrooms.

One can truly say it was a project of the Austin AA community at large because it was funded by Foundation-members and non-members alike.

The Foundation and the SAF clubhouse continue to serve the Austin AA community by “providing a permanent home for AA in Austin.”

The SUBURBAN ALCOHOLIC FOUNDATION (SAF) was incorporated by members of the Suburban Group in 1955. The Foundation was established to provide a permanent home for Alcoholic Anonymous in Austin. SAF is a nonprofit 501c3 corporation operated by a Board of Trustees. The Board of Trustees is the owner and operator of the facility. In line with AA traditions, the Foundation Manager is employed as a special worker.

Experience has taught us that the successful operation of the Premises depends to a large extent upon monies received from the Foundation Members.

Any sober member of the Northland Group of Alcoholics Anonymous may join the Foundation for the monthly contribution currently in effect. 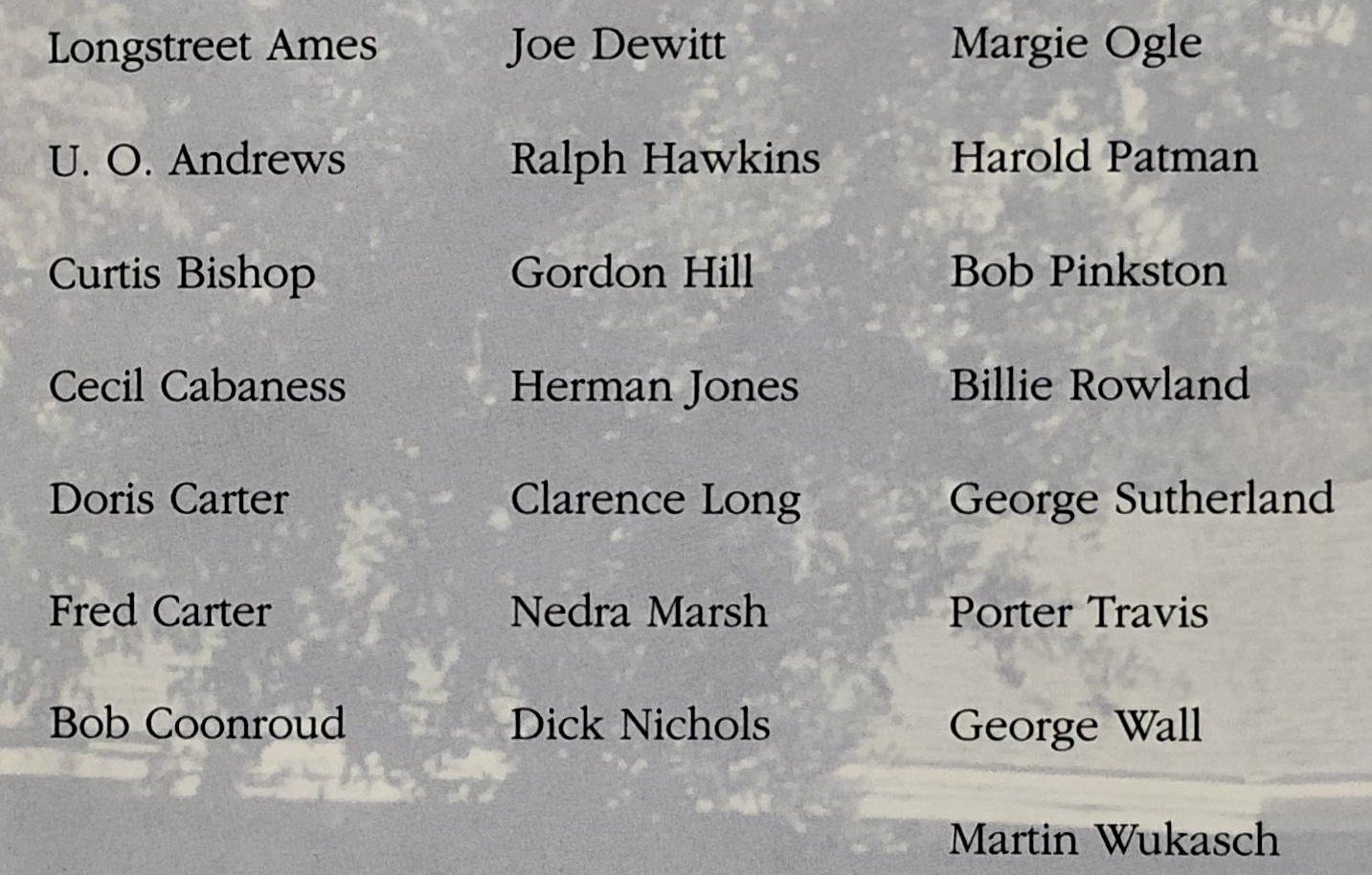